ON THIS DAY: July 4, 1939. Lou Gehrig delivered one of the most memorable moments in Baseball history. It was “Lou Gehrig Appreciation Day,” and 61,808 adoring fans showed up to honor the recently retired Yank’s star befallen by illness, between games of a doubleheader against the Washington Senators.

In attendance was Lou’s beloved mother and father, his wife Eleanor, members of the 1927 Yankees, including Babe Ruth as well as New York Mayor Fiorello H. LaGuardia, US Postmaster General James A. Farley and Yankees’ president Ed Barrow.

Various gifts were presented to Gehrig from club employees and the rival New York Giants. A silver trophy with all the Yankee players’ signatures on it was presented by manager Joe McCarthy.

With bowed head Lou stood before the microphones at home plate with his Yankee teammates and the Senators aligned on each side. The crowd waited for Lou to speak. But to emotional to speak, Lou turned to Sid Mercer, dean of baseball writers and Master of Ceremonies and asked him to thank everyone for their kindness. But the crowd rose and chanted emphatically, “We want Gehrig! We want Gehrig!” Lou drew a handkerchief from his pocket, blew his nose and stepped up to the microphone and than delivered one of the most oft-quoted speeches in American history, describing himself as “The luckiest man on the face of the earth”.

Click on image below to read his full speech: 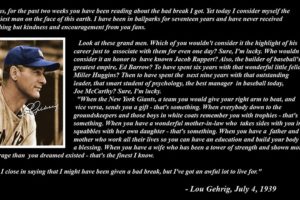 Watch his speech below: